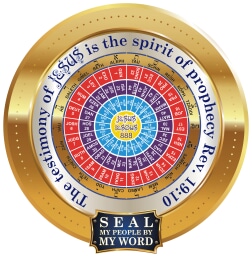 Sealing God’s People, Part One, will cover the first step in a series of four steps as revealed in the Word of God. The levels are as follows:

Salvation? What is necessary to be counted worthy of the resurrection? Grace? Faith? Faith with works that accompany salvation? A holiness standard? There are as many doctrines of dogmas as there are preachers. Either you believe that you have to overcome by faith through obedience to the measure of JESUS or on the other hand simply “ask JESUS into your heart and you are saved”. If you know in your heart that there is more glory to be obtained by faith than the body of Christ is currently experiencing, then this article is for you. There are three distinct levels of glory in the growth of a Christian until full maturity is obtained in our Lord JESUS which is the central theme of this blog. Consider the following verse of scripture written by Paul to the Romans.

As believers, we all begin at the level of newborn babes who desire the sincere milk of the Word that we may grow thereby. To be born again requires obedience to the scriptures as JESUS stated to Nicodemas that he must be born again of the water and the Spirit.

This is accomplished by repentance followed by baptism in the name of JESUS Christ for the remission of sins (born of the water) and being filled with the Holy Ghost (born of the Spirit).

“Then Peter said unto them, Repent, and be baptized every one of you in the name of Jesus Christ for the remission of sins, and ye shall receive the gift of the Holy Ghost. For the promise is unto you, and to your children, and to all that are afar off, even as many as the Lord our God shall call.” (Acts2:38,39).

This is the beginning of the believers’ walk in God. As the believer matures, he or she goes from glory to glory by the obedience to the Word of God.

The first level of glory is that of being born again as newborn babes who desire the sincere milk of the Word that they may grow. This is the first sealing or first stage of the glorification process which is progressive until the believer reaches full maturity being that of fathers. The closer the body of Christ is to the Second Advent of our Lord JESUS, the greater the light will shine in truth as revealed by the Holy Ghost until the church is presented to JESUS blameless in both sprit, soul, and body.

“But the path of the just is as the shining light, that shineth more and more unto the perfect day.” (Proverbs 4:18).

The church must understand that the glory is progressive going from line upon line, precept upon precept. Though the outward man is perishing, the inward or spiritual man is renewed day by day by the daily bread of the Word of God. This requires continuing in the Word of God in order to be a disciple of JESUS Christ, in knowing the truth and the truth setting each believer free. Obedience is required in being led and guided by the Holy Ghost unto righteousness, going from glory to glory into the perfect image of JESUS. JESUS is coming back the second time for the glorious church without spot or blemish; the church being in the perfect image of Himself.

“Know ye not, that to whom ye yield yourselves servants to obey, his servants ye are to whom ye obey; whether of sin unto death, or of obedience unto righteousness? But God be thanked, that ye were the servants of sin, but ye have obeyed from the heart that form of doctrine which was delivered you. Being then made free from sin, ye became the servants of righteousness. I speak after the manner of men because of the infirmity of your flesh: for as ye have yielded your members servants to uncleanness and to iniquity unto iniquity; even so now yield your members servants to righteousness unto holiness.” (Romans 6:16-19).

A believer must continue growing up into the perfect image of JESUS Christ through obedience unto righteousness. Righteousness is the truth that God progressively glorified His own human body under the law back to Himself, for God was in Christ reconciling the world back to Himself. Even though JESUS is the Son of God, God manifest in the flesh as the Son of God, he learned obedience through the things which he suffered, making the captain of our salvation perfect through sufferings. Without holiness which is the believer taking part of His divine nature, no believer will see the Lord JESUS at His coming. Holiness is only achieved through obedience unto righteousness unto holiness. Grace reigns only through righteousness; that is, that JESUS glorified His own human fulfilling the law back to Himself, the Son of God being glorified with the Father’s own self. The forerunner has already entered in and has prepared a place for the true believer who overcomes the devil, the world, and his own flesh. This is only accomplished through obedience and leading into all truth by the Spirit of truth, the Holy Ghost.

“As newborn babes, desire the sincere milk of the word, that ye may grow thereby.” (1 Peter 2:1).

This level of glory is the first level of sealing, the babes being unskillful in the word of righteousness.

“In whom ye also trusted, after that ye heard the word of truth, the gospel of your salvation: in whom also after that ye believed, ye were sealed with that holy Spirit of promise, Which is the earnest of our inheritance until the redemption of the purchased possession, unto the praise of his glory.” (Ephesians 1:13,14).

The newborn babe in Christ after being born again is sealed by the Holy Ghost and has the power through the Holy Ghost to become sons of God, being born of the Spirit of God. Obedience is required to grow from faith to faith and from glory to glory.

The first growth is from new born babes to little children as declared by John in his epistle.

“I write unto you, little children, because your sins are forgiven you for his name’s sake.” (1 John 2:12)

There are two criteria for being little children;

There are many scriptures that prove that JESUS is the Spirit, the Father who created all things. Here are a few quotations.

“I and my Father are one. Then the Jews took up stones again to stone him. Jesus answered them, Many good works have I shewed you from my Father; for which of those works do ye stone me? The Jews answered him, saying, For a good work we stone thee not; but for blasphemy; and because that thou, being a man, makest thyself God.” (John 10:30-33).

Jesus claimed to be the same as the Father using the Greek word “heis” which is “one and the same”. “Heis” is not a union with the Father, but is the Father being One and the Same. Because the Jews knew that JESUS was saying that He is the Father revealed in a body of flesh and blood as the Son of God.

“Then said they unto him, Where is thy Father? Jesus answered, Ye neither know me, nor my Father: if ye had known me, ye should have known my Father also. These words spake Jesus in the treasury, as he taught in the temple: and no man laid hands on him; for his hour was not yet come. Then said Jesus again unto them, I go my way, and ye shall seek me, and shall die in your sins: whither I go, ye cannot come. Then said the Jews, Will he kill himself? because he saith, Whither I go, ye cannot come. And he said unto them, Ye are from beneath; I am from above: ye are of this world; I am not of this world. I said therefore unto you, that ye shall die in your sins: for if ye believe not that I am he, ye shall die in your sins.” (John 8:19-24).

JESUS claims again that if you do not believe that He is the Father, you shall die in your sins. The revelation that JESUS is the Father revealed in a body of flesh and blood as the Son of God is necessary for salvation. The little children that have grown from newborn babes to this level of glory have had their sins forgiven being born of the water and the Spirit and know that JESUS is the Father.

“That thou keep this commandment without spot, unrebukeable, until the appearing of our Lord Jesus Christ: Which in his times he shall shew, who is the blessed and only Potentate, the King of kings, and Lord of lords; Who only hath immortality, dwelling in the light which no man can approach unto; whom no man hath seen, nor can see: to whom be honour and power everlasting. Amen.” (1 Timothy 6:14-16).

JESUS is the blessed and only Potentate, the Omnipotent Almighty God, the Alpha and Omega. The man is the Father, the only One who has immortality.

“And without controversy great is the mystery of godliness: God was manifest in the flesh, justified in the Spirit, seen of angels, preached unto the Gentiles, believed on in the world, received up into glory.” (1 Thessalonians 3:16).

“That their hearts might be comforted, being knit together in love, and unto all riches of the full assurance of understanding, to the acknowledgement of the mystery of God, and of the Father, and of Christ; In whom are hid all the treasures of wisdom and knowledge.” (Colossians 2:2,3).

“For in him dwelleth all the fulness of the Godhead bodily.” (Colossians 2:9).

The mystery of God, and of the Father, and of Christ is that JESUS is the man in whom is hid all the treasures of wisdom and knowledge. In JESUS dwells or houses permanently all the fullness of the Godhead in One body. Little children know that JESUS is the Father of glory.

“Let this mind be in you, which was also in Christ Jesus: Who, being in the form of God, thought it not robbery to be equal with God: But made himself of no reputation, and took upon him the form of a servant, and was made in the likeness of men: And being found in fashion as a man, he humbled himself, and became obedient unto death, even the death of the cross.” (Philippians 2:5-8).

The servant is God Himself revealed in a body of flesh and blood as a man.

“Ye are my witnesses, saith the LORD, and my servant whom I have chosen: that ye may know and believe me, and understand that I am he: before me there was no God formed, neither shall there be after me. I, even I, am the LORD; and beside me there is no saviour. I have declared, and have saved, and I have shewed, when there was no strange god among you: therefore ye are my witnesses, saith the LORD, that I am God.” (Isaiah 43:10-12).

JESUS Christ is the Father who formed Himself a body of flesh and blood as a man called the Son of God; the Father revealed in flesh.

In order the make this second sealing or engraving of the Lord JESUS, the believer must have been born of the water and Spirit, his sins forgiven for His name’s sake. And he/she must know that JESUS is the Father. JESUS is “Jehovah (is) Salvation”.

This is the first of a four-part series on the Sealing of God’s People.